On Blockchain, Intermediaries, and Hype

I should start out by saying that this post might not age well. Misplaced optimism is forgotten, whereas undue pessimism is ridiculed. Regardless, if I were interested in agreeing with conventional wisdom and dressing it up as insight I would go work for McKinsey.

In my view, blockchain isn’t going to revolutionize the global economy or fundamentally alter existing corporate structures, and it isn’t going to bring about the end of intermediaries. This is because blockchain is a solution to a non-existent problem.

Blockchain started with Bitcoin. The perception at the time was that existing payment systems did not allow for non-reversible payments to be made online, and this meant that micropayments were impractical. Bitcoin was devised as a solution to that problem. You don’t have to take my word for it, either; this is literally the introduction to the Bitcoin whitepaper:

Blockchain was designed to solve this problem; the goal was to create a payment system without financial intermediaries in which transactions would be practically non-reversible. This would, in theory, reduce transaction costs and make micropayments possible.

The logic wasn’t that trust and intermediaries are inherently bad or inefficient. Rather, it was simply that having a trusted intermediary makes it difficult to have truly non-reversible transactions and transaction fees that are low enough to make micropayments possible. I think this is probably correct, too.

But by the time I became interested in the topic in 2013, everyone had forgotten this history, or at least didn’t care. As a payment system, Bitcoin was supposedly better than, say, using a credit card because transaction fees were lower. If asked, most people involved in Bitcoin would have said that intermediaries are at worst completely unnecessary, at best outdated and inefficient. As far as I could tell, no one really stopped to ask whether intermediaries actually served a useful function.

As stupid as that might sound, this idea has persisted:

Blockchain didn’t get rid of the need for intermediaries. Intermediaries serve useful functions, and the idea behind Bitcoin was simply that sometimes we might not want those functions and the associated cost; remember, “non-reversible transactions for non-reversible services”. But that was long gone. Suddenly, Bitcoin was a better way of buying goods online, because you could save 2% on transaction costs while taking the risk that the seller never delivers. And this was the payment system meant to eliminate trust!

A final point about Bitcoin is that, moving into the present, it didn’t even solve the problem it set out to address. Transaction fees are far too high now to make micropayments possible, and it takes too long to confirm transactions. It was a good attempt, though, so I’m not trying to take anything away from Craig Wright and Hal Finney… I mean Satoshi.

This doesn’t prove that blockchain isn’t the technology of the future, but it does suggest that we should be skeptical. A proposed blockchain application can’t just make some vague reference to trust and removing intermediaries and say that is sufficient. I want answers: Why do I want to remove the intermediary? Why can’t I trust some third party? Will removing intermediaries actually cut costs, and if so, is there anything I’m giving up by losing the intermediary?

It will come as no surprise that virtually every proposed blockchain application that I read about answers none of these questions. There are a few predictable failings that I see time and time again. I want to go through a few of these, as I want to end this unquestioning attitude towards blockchain. The problem isn’t just that the description is inadequate; it really seems that the people involved have not thought about these things.

The first common error that arises is the “thanks to blockchain this is now possible” argument. This occurs when a person has an idea that he or she thinks is only possible using blockchain; in almost every case, this means the person has failed to think through alternative means of implementing the same idea. This type of reasoning would not be accepted anywhere else in tech. It would be like if someone said, “Thanks to NoSQL we can finally store data.”

Here is one such example, albeit from a journalist: 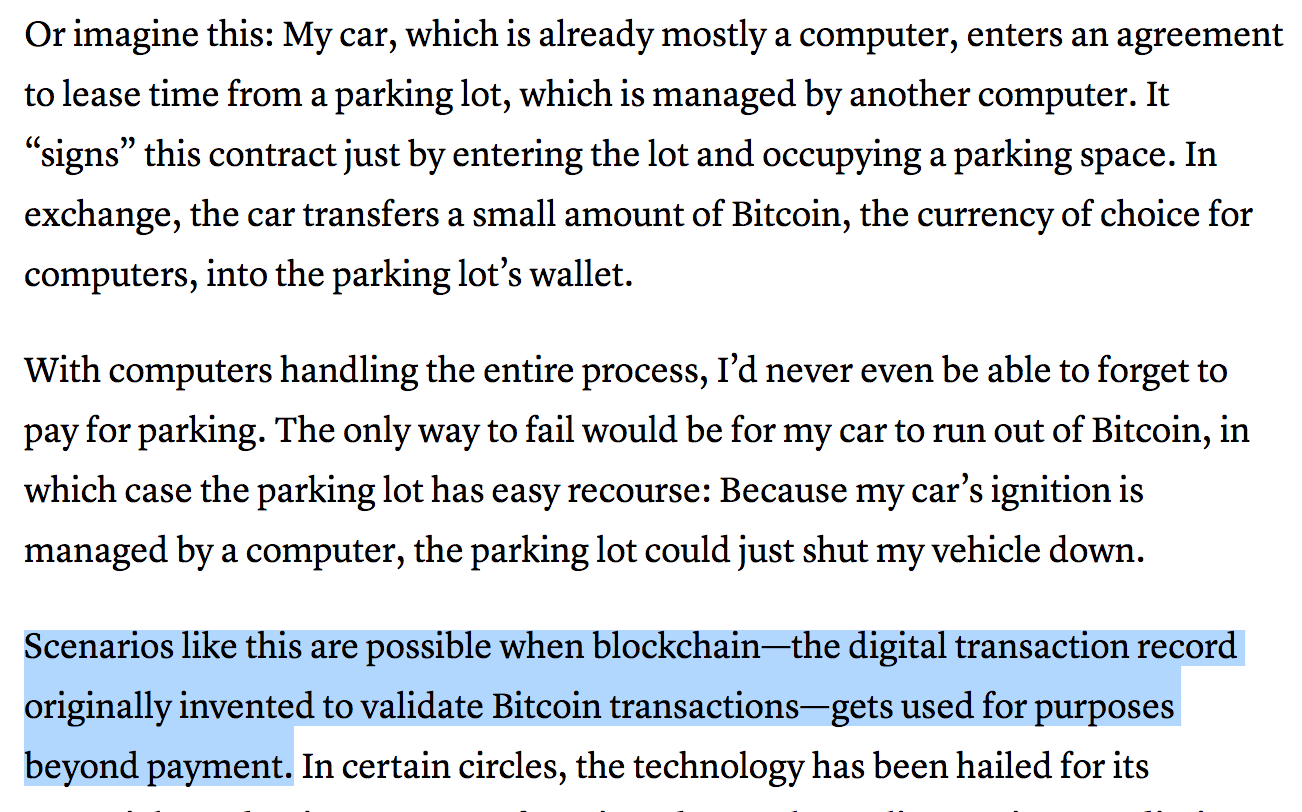 So basically your car will automatically make a payment to some system… sort of like a toll tag, but with the ability to mess with my car if I don’t pay. I’ve had a toll tag on my car for as long as I’ve been driving. I don’t think toll tags use blockchain. Maybe they could use blockchain, and maybe it’d be more efficient, but I want to know why. Like I said, I want answers. This demonstrates a failure to grapple with alternative ways of implementing the same idea and the tradeoffs involved. As another example, I could read these slides on blockchain for small business investment a thousand times and I’ll never understand why the person thinks blockchain is necessary for this.

The second common error I see is the case of pretending that the centralized nature of a traditional database is never a feature. For example, here’s Follow My Vote:

Of course, the case of wanting reversible payments is an example where a central authority in control is a good thing. There are many more examples, too. I am surprised people don’t intuitively get this; as a startup cofounder, people who use my site hate when I say, “I don’t have the ability to fix that”. People just want me to do what needs to be done. Wait until these people hear about blockchain, where there really is no one that can fix things that might go wrong. The best (and funniest) example of this is the DAO. (The DAO, for those who don’t know, was that Ethereum investment vehicle where everyone insisted “the code is the law!” until someone found out how to use the code to divert millions of ETH, at which point the aggrieved parties wanted to find the person and bring him or her to court.)

The final common error is the “all problems are technological problems” assumption. This is best exemplified by this proposal to use blockchain in the energy industry:

Meanwhile, I am trying to convince the utility companies in Texas that REST is good and that web servers shouldn’t crash once per week. It is evident that there is something deeper going on here that explains the inefficiency in this market. There is some human or institutional factor that is holding things back, and new technology just will not solve that problem. After all, it is 2017, and the utility sector’s technology is from the early 2000s. Blockchain might be great for the energy sector, but the supposedly impending economic revolution will be filled with consultations and rulemaking procedures. Humans are in charge, and that will continue to be the case. You best plan accordingly.

A Problem No One Has

Blockchain attempts to solve a problem that you didn’t know you had: the problem of the trusted intermediary. As a programmer, I’ve never gone on Stack Overflow and asked, “I need to design a system that works like a database but guarantees no one can control it, including myself.” I’ve never seen that question asked, either. And as an individual consumer, I’ve never thought, “What I don’t like about this product/service is that it has a trusted intermediary.” These things just don’t come up.

Satoshi had a reason to need these features, but the application in question was extremely unusual. Satoshi was also nice enough to expressly explain why these features were necessary. Those who have taken up the blockchain’s cause seemingly feel no such need. Removing intermediaries is now the goal itself, and we’re supposed to be happy about that.

So count me out. Blockchain solves a problem that no one actually has, and the people who tout blockchain as a game changer don’t seem to understand that. The hype is bound to continue, but I hope we wise up to the limited utility of blockchain sooner rather than later.